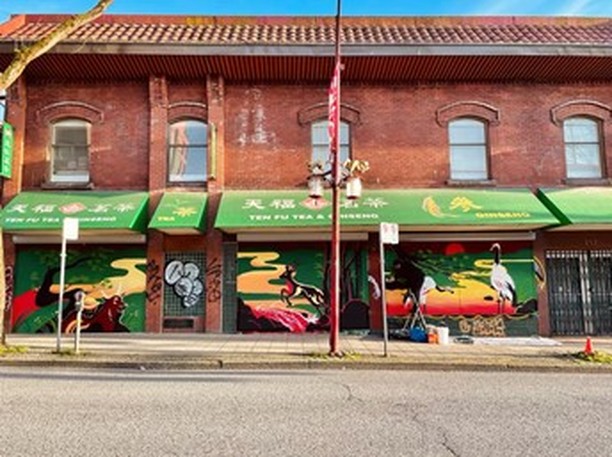 The first Chinatown mural, named “Fu Lu Shou Xi”, is created by Vancouver-based Chinese Canadian illustrator and mural artist, Carolyn Wong, whose artwork is informed by both traditional themes in Asian culture, as well as the colourful and graphic elements seen in pop culture. It is located on the prominent southeast corner of Main and Pender Street, where Ten Ren Tea & GinsengCompany has been a retail fixture inChinatown for more than 30 years.

“There has been significant media attention on graffiti as a big problem inChinatown,” says Jordan Eng, President of the Vancouver Chinatown BIA. “We needed to view this problem through a new lense by bringing visual arts and culture together and enhance our neighbourhood. VMF has been building bridges among communities, and Dr. Sun Yat-Sen Classical Chinese Garden is the cultural institution in Chinatown. By working together, we can bring better understanding to our culture.”

Wong’s beautiful work of art is prominently displayed on Ten Ren Tea & Ginseng Company’s six rolling shutters, which were often tagged over and over. At the Main Street entrance, passersby will see an artistic depiction of a tea plantation landscape, featuring signature rolling hills in the countryside. On Pender Street, the panels offer four traditional Chinese blessing, “Fu Lu Shou Xi”; Fu Is the blessing of fortune, Lu is the blessing of success and prosperity, Shou is the blessing of longevity represented through the cranes, and Xi is the blessing of happiness often represented by peonies. Each panel resembles a celebratory red pocket which is given to friends and family to wish them a prosperous future.

The theme of the project was developed with Henry Huang of Ten Ren Tea. He states, “Being located on the major crossroad in Chinatown, we want the mural to be a symbol of peace and harmony with our neighbours.”

The mural is now on display. Its colours reflect the dominant neighbourhood structures and storefronts, namely red brick, green awnings and gold/yellow accents.

“Art can help build bridges within communities,” adds Lorraine Lowe, Executive Director for the Dr. Sun Yat Classical Chinese Garden. “How we express ourselves together is vital for the survival of Chinatown, our history, and our cultural heritage. We hope this first mural is just the start tomany more.”

For more information about the Chinatown Mural Project, please contact the Media Contacts.

The Vancouver Chinatown BIA Society (VCBIA) is a community-based non-profit organization situated in the culturally rich and historic Chinatown in Vancouver, British Columbia. Our mandate is to encourage and promote the Chinatown business community. VCBIA takes a lead role in expanding partnerships with government, community organizations, and corporations to develop initiatives, improve the physical environment of neighbourhood and implement marketing programs to promote the community to locals and tourists alike. We achieve our mission through our commitment to the principles of innovation, integration, and collaboration, by acting with passion and integrity, and by encouraging community stakeholders' involvement that focuses on economic resilience and sustainability.

VMF is a non-profit dedicated to artistic and cultural development in Vancouver. We create experiences that connect art and people in public space. Since 2016, VMF has created 300+ murals, produced the annual Vancouver Mural Festival, launched VMF Winter Arts, and works year-round to create private and public arts-driven projects through VMF Agency. VMF recognizes that its public art and events take place on the unceded territories of the xwməθkwəy̓ əm (Musqueam), Sḵwx̱ wú7mesh (Squamish), and səl̓ilwətaɁɬ / sel̓íl̓witulh (Tsleil-Waututh) Nations. Vancouver Mural Festival is the DBA name of Create Vancouver Society, a Registered BC Non-Profit.

Dr. Sun Yat-Sen Classical Chinese Garden is a registered museum and one of Vancouver’s top tourist attractions. It is a unique venue for cultural programming and events, including guided tours, concerts, festivals, exhibitions, receptions, and educational programs. This Ming Dynasty- style garden-home is the first among its kind to have been built outside of China, and continues to be unique among the world as the result of the joint collaborative effort of community members, the Canadian Government, and the People’s Republic of China. As a registered not-for-profit, all Garden revenue goes toward the fulfillment of our mission to bring together cultures and communities through educational and public programs. Over the years, the garden has received several honours and designations: it is one of Vancouver Heritage Foundation’s “Places That Matter”; was named World’s Top City Garden by National Geographic in 2011; and voted Canadian Garden of the Year by the Canadian Garden Tourism Council in 2012. 578 Carrall Street, Vancouver 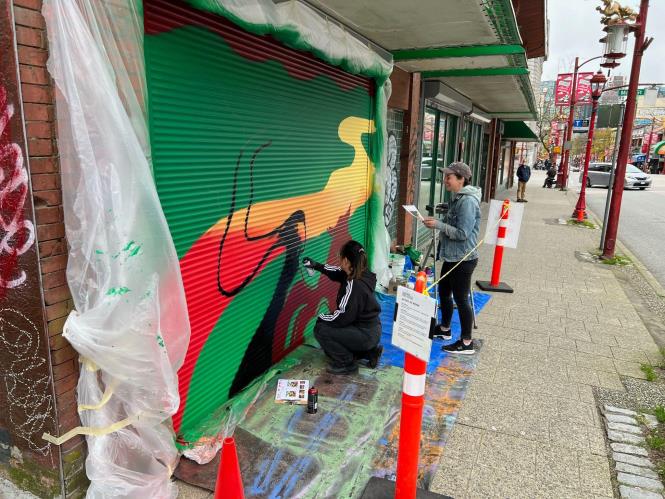